Congratulations to Euphoria and Tony Coleman for winning the 2019-20 Division 1 Summer Series.  Supporting Tony were his crew: Andrew Parker, Margy Merewether, Ted Merewether, Fiona Erhardt, Donne Newbury, Cate Malone, Laki Sikes, Sarah Price and Joanne Epp (and yes, that is 6 ladies and only 4 men). It is the first time Euphoria has won a Summer or Spring series at RSYS.

Congratulations to Charles Curran and his crew on SYDNEY, winner of the RSYS 2019-20 Main series pointscore.  He will be awarded the Boomerang Cup. Second overall was Geoff Davidson and his crew on JACKIE CLARE.  Peter Campbell and his crew onboard ISUPER finished third.

SYDNEY, an Iain Murray designed 18.5 metre yacht owned and skippered by Charles Curran, competed in her 20th consecutive season in the RSYS Division 1.  This followed a successful ocean racing record, with line and handicap wins in a number of the longer ocean races on the East Coast and several good results in Sydney Hobart races.

SYDNEY’s loyal crew who have sailed together for most of the 20 years are led by Charles’ long time Sailing Master David Kellett and includes prominent RSYS members Bruce Gould, Peter Hemery, Tim Court and Frank Walsh. The regular crew also includes Colin Tipney and John Woodford who have sailed with David for nearly 40 years.

Each year Charles and David and other crew members encourage younger sailors to become part of the team in an effort to introduce them to sailing large yachts. This has resulted in many of them going on to some remarkable achievements in their sailing careers over the years. The results over the past years have been a reward to the close-knit crew who sail the boat very competitively with 5 Main Point Score wins in the last 10 years.

The 2019-2020 sailing season proved to be a very different season for all, with the loss of 7 races in the point score due to weather, SailGP and the last three to COVID-19. The SYDNEY crew displayed good teamwork with seven 1st and two 2nd during the season, capitalising on her winning form at Hamilton Island earlier, in 2019. 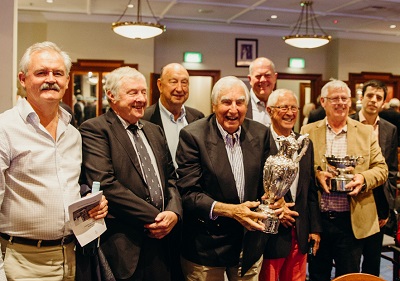 This beautiful trophy was donated to the Squadron in 1938 by Michel Francois Albert for the Division 1 Season Pointscore. It is a Scottish Sterling Silver Claret Jug, Edinburgh hallmark 1835.